Optimization following a parametric study provides Haas-Meincke with material savings of more than 40%. The project is a good example of the challenges that FRECON solves during ‘genstartNU’, an initiative in collaboration with the Danish Industry Foundation. It often becomes a win-win, as FRECON gains valuable knowledge for future projects.

The optimization at Haas-Meincke, a member of the Bühler Group, has taken place on a frame for a drive station. It stretches the conveyor belt that runs through one of Haas-Meincke’s tunnel ovens. The method now forms the basis for optimization across several areas in the production line. 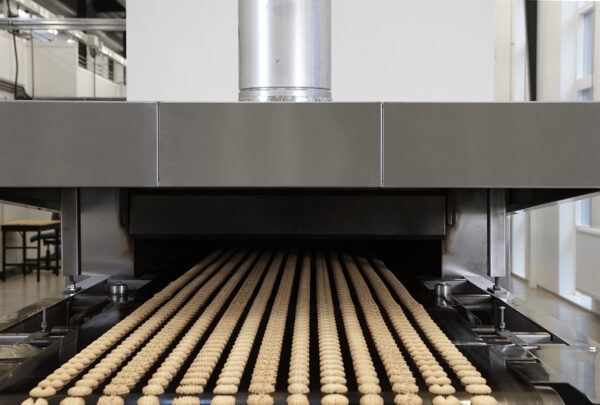 “We carried out a minor parametric study and based on this, we were able to calculate which profile for the frame could handle the maximum load scenarios, while still implementing significant material savings. We achieved a material reduction of 42% (steel). At the same time, the frame remains stable and secure, which is of great importance to Haas-Meinke’s customers.”

Haas-Meincke’s Head of Engineering and R&D – BU Biscuit, Constant Ngogang, previously had the desire to get started with an optimization project. The possibilities during the initiative ‘genstartNU’ (translates ‘restartNOW’) became the opportunity to get started.

“We had a really good collaboration with Jan from FRECON, who documented the possibilities for us. We are now continuing the work according to the same method and have hired an employee to carry out the optimization project,” says Constant Ngogang. “In the long run, it provides a good competitive advantage for us and at the same time supports our focus on more sustainable solutions.”

FRECON achieved a material reduction on 42% of the steel on a frame for a drive station that stretches Haas-Meincke’s conveyor belt through a tunnel oven. The method now forms the basis for optimization across several areas in the production line. Photo credit: Haas-Meincke.

New opportunities for gathering knowledge
Up until now, FRECON has solved projects for more than 50 SMEs in various industries during ‘genstartNU’.

“We have good experience in finding out where the shoe pinches, and we know where to put in the right calculations and optimizations, as was the case with Haas-Meincke. Our experience from major customers is often an advantage in working with SMEs,” says FRECON’s CCO Michael Elefsen. “At the same time, we have gained many good experiences through these projects. The SME projects are most often on a smaller scale, and we have built up valuable knowledge from the diversity of the projects, which is similarly useful for other customers.”

Promoting innovation and competitiveness
When launching the initiative ‘genstartNU’ with FRECON, CEO of the Danish Industry Foundation, Thomas Hofman-Bang said:

“We want to contribute to the emergence of some well-equipped companies on the other side of the crisis. Companies that have developed and strengthened their competitiveness and who will be able to quickly increase revenue.”

Looking forward to new projects
At FRECON, a sense of pride is present from the results of the many projects carried out during ‘genstartNU’.

“When we evaluate more than halfway through the entire project, it is a pleasure to see how our skilled light bulb heads have helped customers move forward on projects that were standing a bit still – and they are appreciated for their work,” says Michael Elefsen. “We look forward to the upcoming projects and have just over 40 in the pipeline.”