From a sole proprietorship operating out of a basement flat to a well-established engineering firm at three locations.

Frederik Rytter is 28 years old when he starts his own one-man consulting firm FRECON – Mechanical Construction in 1999. In its first year, the company is run from a basement apartment on Vendsysselgade in Aalborg. Prior to this, Frederik has thoroughly developed his mechanical and 3D design expertise working at Mekoprint, Scanomat and Eurocom Industries.

A passion for mechanical structures

FRECON’s first year is spent on small tasks at various locations, but in 2000, Vestas Wind Systems contacts the company. Frederik becomes associated with the company’s projects in its development department in Lem. Almost 20 years later, FRECON is still a loyal and close partner of Vestas.

The collaboration with Vestas also leads to FRECON’s first employee.

FRECON relocates to a new main office in Viborg in 2001.

FRECON becomes a public limited company and Leif Christoffersen joins as a partner.

On 1 January 2006, FRECON is converted into a public limited company and Leif Christoffersen acquires 50% of the shares. FRECON’s first board of directors is created.

Frederik and Leif know each other well from their time at Mekoprint and later on in connection with Bent Jensen Maskin- & Værktøjsfabrik A/S. Here the two men also met Leif Bernth. On 1 May 2006, FRECON hires Leif Bernth, who continues to be an essential member of the team.

From a basement in Vejle to an office in Viborg

FRECON’s staff grow from 10 to 21 employees in 2008, so the company relocates to a larger and more established office in Transportcenteret in Vejle. 95% of FRECON customers are from the Wind Power Industry.

In 2009, Frederick relinquishes the position of CEO and, with it, responsibility for day-to-day operations. Now Frederik can return to his passion – concentrating on customers’ mechanical designs.

FRECON continues to grow strongly and in 2010 the company moves to an even larger office in Transportcenteret in Vejle.

By 2012, FRECON has 25 employees and expands once more. This time it relocates to Egeskovvej 2B, next to the motorway in Horsens N.

Bo Birkemose joins the company as its new CEO in 2015. His objective is to strengthen the strategic development and create the basis for future growth.

Growth accelerates with the hiring of a sales director

Projects grow in size and FRECON hires a project director

Customer projects are now more evenly split between the wind power industry and other industries.

FRECON acquires a new visual identity in 2019, including a new logo, new templates and above all, a new website.

In 2019, former Sales Director, Claus Mølgaard Jensen, assumes the position as CEO. Claus has since 2017 been a close sparring partner in the management team and has had great influence on the growth and strategic development of the engineering company. 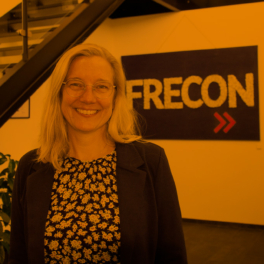