100+ meter wind turbine blades weighing about 50 tons and counting. This pushes the demands for test rigs that are to test the endurance and strength of wind turbine blades. Blade Test Center A/S (Blaest) and engineering house FRECON A/S know how to do it. They are collaborating on the calculation and design of a new test rig of approx. 1,000 tons that can handle extreme fatigue loads and wind turbine blades of +100 meter.

The new test rig will be located in the blade test center Blaest in Aalborg, which is among the world’s most experienced test centers. With a capacity 20% larger than their currently largest test rig, the new test rig will be the largest of its kind. The test rig can withstand enormous fatigue loads and will be able to test wind turbine blades for periods of up to one full year. 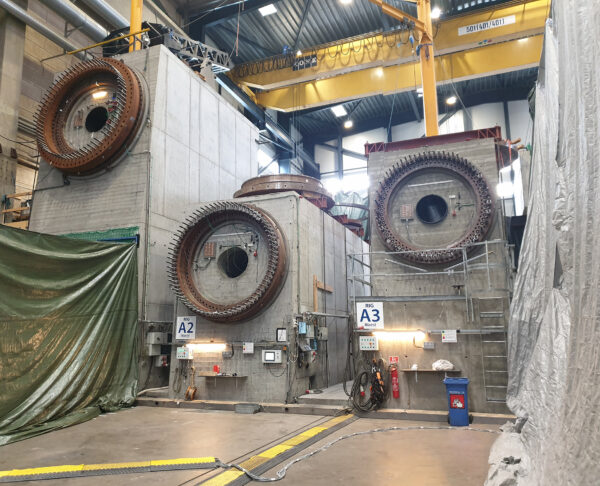 The engineering house FRECON in Horsens is in the process of designing and calculating the test rig. This is FRECON’s second test rig made in collaboration with Blaest. The first was put into service in 2020.

“It was clearly an advantage to collaborate with FRECON again on the development of a new test rig, as they have tried it before. The first test rig delivers what it is supposed to do. In addition, they are great sparring partners who gladly engage in dialogue and often bring new ideas to the table along the way. This has great value to us,” explains CEO of Blaest, Erik Steen Jensen.

Design and calculation of extreme loads

A test rig of this caliber is exposed to extreme fatigue loads. It has therefore been important to assemble a team of skilled calculators and designers who understand the materials and movements of the test rig components. The limits of what the materials must be able to withstand are pushed to the extremes and to the edge of their capacity.

”The best way to explain what the test rig should be able to do is if you imagine that you fix a ruler to a table edge and put it into upwards and downwards oscillations. The difference is that each blade weighs 50 tons and that the whole test rig and the foundation gives way when the many tons are set into motion,” explains Janus Holm, engineer and project manager at FRECON.

The test described by Janus is part of the fatigue test that the wind turbine blades must go through, which tests the life cycle of the blades. Another important test is a static test in which the blades are pulled, and as a result they bend until they reach their breaking point. This simulates an extreme load event that can occur when a wind turbine is in operation during extreme weather conditions.

“It is incredibly exciting to work on a task like this, where a steel-concrete structure becomes a machine that must be able to handle extreme fatigue loads. It is a somewhat atypical task that we take great pride in solving in collaboration with Blaest,” explains Team Lead FEM/CFD in FRECON, Sebastian Mikkelsen.

Both types of tests, static and fatigue, apply loads that are felt both in the blades and the test rig, but also in the entire building. When 50 tons of blades are moving up and down, the whole foundation and building will be able to feel that blades are being tested. This happens even though the test rigs are mounted on a two-meter-thick foundation on top of 400 foundation piles that are anchored to the ground.

Testing for the world’s most recognized manufacturers

The test rig is expected to be up and running in the beginning of 2023 and will phase out two older test rigs. In total, Blaest will have seven test rigs operating to test wind turbine blades for some of the world’s most recognized manufacturers all year round. 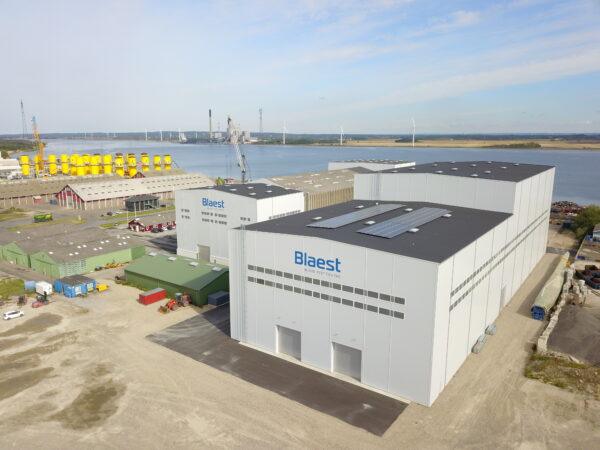 A wind turbine blade is tested for its life cycle up to one year at a time, and during that period it undergoes the two above-mentioned tests: Static test and fatigue test. Where the static test is a deflection of the blades, the fatigue test means that the blades are moved up and down in oscillations.

The test rig is expected to have a service life of approx. 10 years, unless the blades grow too large for the test rig. It must be mounted a two-meter-thick concrete floor resting on 400 piles of 30 x 30 centimeters.