Bib-bob, bib-bob… If we take this road here, and that shortcut there… That’s the easiest and most efficient way!

“Bib-bob, bib-bob… If we take this road here, and that shortcut there, with an average speed of… more or less… Well, that’s the easiest and most efficient way!”
This is the inner voice of our new Mechanical Engineer, analytic enthusiast, and team player.

Ulrik is a curious and clever fellow, who loves sport, analysis, and teamwork. He holds a master’s degree in Mechanical Engineering with a great interest in thermodynamics, structural mechanics, and fracture mechanics – oh and he is also a big football fan.

But that is not all there is to him. Ulrik has a huge interest in figuring out how things work, and in using math to verify if in fact they withstand what they are designed to.

This approach is applied to all aspects of Ulrik’s life. He cannot help but put his mathematical and analytical brain to use in everyday situations. Like when he planned how moving from one house to another could be the most efficient based on where boxes where loaded and which route to take.

Ulriks’s big interest for analysis also came into play during his Master where he developed an analytical model to describe how geometry effects fracture mechanics.

“It’s so much fun to look at imperfections and cracks and figure out under which loading a crack grows. That way it is also possible to identify how to stop a crack from propagating. That’s super cool!”

His desire to acquire new knowledge also gave him the role as a student teacher of thermodynamics at Aarhus University. But even though Ulrik is a talented solo worker, he prefers to work in teams.

“It’s just so much more fun when you’re part of a team. It’s the best feeling when you solve a difficult problem together” 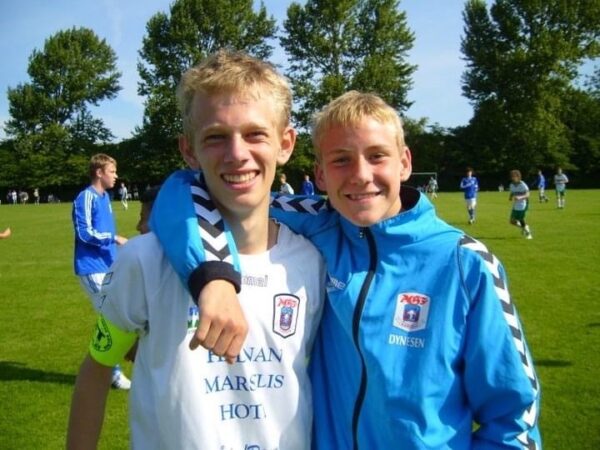 And this is pretty much Ulrik in a nutshell. To give an example Ulrik played “a little elite level tennis” but gave up the sport for football, which he was worse at, simply because he loves to be part of a team.

At FRECON Ulrik is already calculating away. We have come to know him as a welcoming, diligent, and thorough colleague, who likes to document and verify the different structural elements.
We are certain it will continue to be a pleasure to work with him.