FRECON’s experience with design of machines and handling equipment was exactly what Vase-Tec and HSV Combi was looking for when optimizing and designing a rack filler and transport solution for a major Nordic dairy company.

HSV Combi and Knud Erik Vase from Vase-Tec have many years of experience in the design and calculation of dairy equipment. On their latest project for a major Nordic dairy customer, Vase-Tec and HSV Combi sought for help and FRECON was chosen based on their competencies within mechanical design of food processing equipment.

HSV Combi is built on the know-how of Vase-Tec

Optimization and calculation of design

Thus, it was Knud Erik Vase who worked alongside Thomas Christensen and Peter Jacobi from FRECON. The two FRECON engineers began by familiarizing themselves with the 3D modeling software Alibre, which is the design tool used by Vase-Tec.

“Knud Erik had made a number of sketches for the design of the solution, which we continued to work on based on the guidelines given. In that process, we came up with several optimization proposals and made a number of strength calculations,” says Peter Jacobi. “We also recommended an alternative motor, which could ultimately provide a lot of savings.” 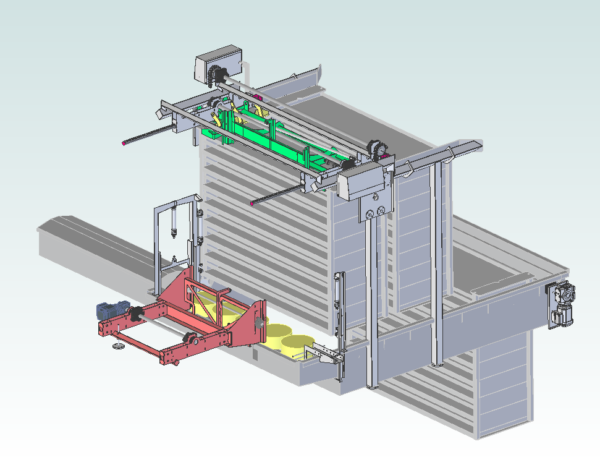 The construction, a rack filler, must be able to carry 1.5 tons of cheese, which is to be transported three meters above the ground, placed on shelves and then moved to a large pool with brine, where the cheese becomes deliciously soft, before transportation.

“Throughout the entire design process, we have benefited greatly from both Knud Erik’s extensive knowledge from the dairy industry and our own experience with design for other segments in the food industry. Hygiene and the ability to keep the construction clean is crucial. It is everything in this business,” says Peter.

Knud Erik Vase looks back with satisfaction on the project, where he experienced great commitment and a high level of professionalism from FRECON’s engineering team.

Peter and Thomas offered just the right competencies we were looking for. They quickly got acquainted with both the 3D software we use and the whole mindset behind the project. With their help, we have completed the constructions about 97%. After that, I did the last bits myself. From the beginning, I was a bit skeptical about the use of external help in general and a possible lack of focus. But the experience has only been positive. Peter and Thomas have fully lived up to what we had hoped for.
Knud Erik Vase, founder and CEO, Vase-Tec